If you haven’t gone to Georgia, please do so. It is a country of great landscapes, interesting history, excellent food and great hospitable people. When we arrived, at the passport control we were greeted with a small bottle of Georgian wine, just to give you an idea (that was 2015, not sure if they do it any longer).

However it might not be a country of great cartographers, as I and my friends found out. Most of the maps of the country that are of some use for hikers and trekkers are published by a small company called Geoland, however we found out that their accuracy, at least for the Svaneti region, was not the best (we pointed this out at their shops once back to Tiblisi and they promised to look into the matter).

At the same time we noticed how, as it is often the case, OpenStreetMap covered the areas pretty well, and with the OSM data uploaded on the GPS we could make do – of course missing all the relief detail in the process. This prompted me to try to make a map of the Svaneti region based on freely available resources with the idea of uploading it as a background map on the GPS device. It didn’t work as well as expected, mostly because of the poor resolution of my GPS (the old Garmin eTrex30), and because of the size of the final file, but with a more advanced device the trick should work.

Moreover, I ended up being very pleasantly surprised at the results that even a non professional cartographer can reach with freely available resources and a bit of experience with QGIS. The final map is published here below. As I mentioned, the data used are freely available in internet, more specifically from OSM for all the vector information and USGS Earth Explorer for the raster. 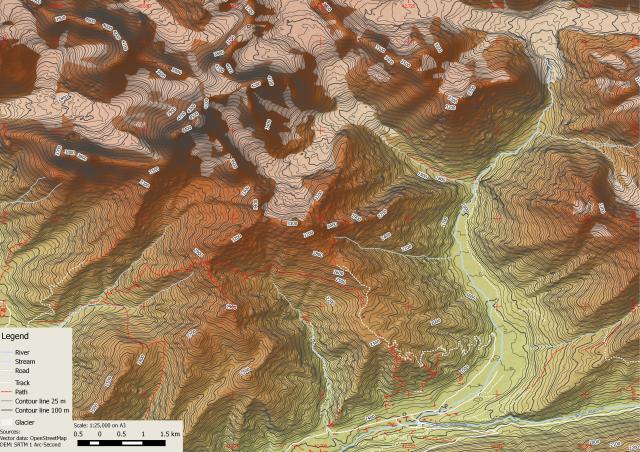