A few days ago, I wrote a post about sexual exploitation and abuse (SEA) in humanitarian settings, suggesting the creation of a certification scheme for organizations that were complying with a standard of appropriate measures to prevent and respond to SEA.

A member of the staff of the Humanitarian Quality Assurance Initiative (HQAI, more on them below), kindly reminded me that basically a standard that includes measures against SEA already exists: the Core Humanitarian Standard. It is true, and I should probably have mentioned it in the original post, together with Sphere and a couple of other initiatives, as an example of standard within the humanitarian sector. My original idea was to write a separate post on these initiatives, so here we go.

For those who are not familiar with CHS (I quote from the CHS Alliance website, where further details can be found): 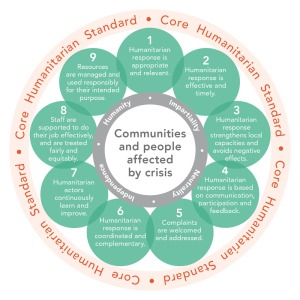 The CHS describes the essential elements of principled, accountable and high-quality humanitarian action. Humanitarian organisations may use it as a voluntary code with which to align their own internal procedures. It can also be used as a basis for verification of performance.

Small historical digression: starting from 1994, in the aftermath of the genocide in Rwanda, the humanitarian community underwent a process of reflection and re-assessment of its performance. One of the most important outcomes of this process has been the Sphere Project, initiated in 1997 by a group of NGOs and the International Red Cross and Red Crescent Movement, with the aim of improving the quality of humanitarian response. The outcome of this initiative has been the creation of the Sphere Handbook (2000, 2004 and 2011 editions), which is in fact broadly accepted as the main trans-agency set of standards in humanitarian action.

The structure of the handbook can be confusing at times, but basically is built around a document called the Humanitarian Charter, from which stem the Protection Principles, Core standards and minimum standards (these are technical standards).

The CHS was completed in 2014 as a result of a cooperative work of CHS Alliance (which in turns is the result of the fusion of two other previous initiatives aimed to improve humanitarian performance and accountability, People in Aid and Humanitarian Accountability Partnership, HAP), Groupe URD and Sphere itself. Compared to Sphere, CHS focus on to the core aspects of humanitarian work, without attention to the technical aspects, roughly reflecting the first part of Sphere Handbook in its 2011 edition (CHS is going to be incorporated in the next edition of the Sphere Handbook).

As of today, Humanitarian Quality Assurance Initiative is the only organization performing these audit tasks. On their website can be found the summary reports of audited organizations, a really interesting source of information to understand achievements and challenges organizations are facing on the ground in implementing the CHS (as an example, implementation of complaint mechanisms seems to be challenging for more than one organization). It is hence a relevant tool for researchers, practitioners, as well as for private donors that want to make informed decisions about their money (it would be great if in the future the results of the reports were also available in formats that makes data analysis easier).

I think that most of the considerations that I moved regarding SEA are generally valid for all the aspects that are touched by the CHS, and the success of the verification and certification schemes (and conversely of auditing organizations) is of great importance for the future of humanitarian sector and the quality of humanitarian response. I would have expected indeed more space and attention to be devoted to these initiatives in the aftermath of Oxfam case, as an example of a way to tackle the problem.

However, I also believe that SEA present a set of challenges that, while partially addressed by CHS, would require an additional set of tools to be effectively tackled. I will try to deal with this in a separate post in the next weeks.